One time I went to Costa Rica with some girlfriends. We arrived late in the capital, San Jose, but were excited to be out of the U.S., so Emily, Ellen and I did not go to sleep. We went out to grab a late night snack and some tequila (items not necessarily listed in order of importance).

There was no menu so we ordered our food by pointing at what the two other people were eating and adding the words “más queso” (“more cheese”).

Sitting on the counter was a large vat of something that looked like pickled cabbage. Emily is our foodiest friend and she felt this cabbage would compliment our mystery meal perfectly. She piled a healthy portion onto our communal plate and we all gave a thumbs up.

This was our first mistake. I remember seeing the locals as she did this. There was fear, hesitation, and silence. But we ignored them, and this was our second mistake.

We sat at a table facing the street, whispering that it was unsettling and possibly rude how much everyone was staring at us. We chalked it up to being super sexy and moved on.

Emily created the first bite. It was a fabulous bite that included a large ratio of the cabbage concoction. I did the same and we placed it in our mouths.

The fire hit Emily first and I knew I was in trouble when I saw her eyes. She wasn’t looking at me, she was somewhere else. Then the fire hit me and I went somewhere else too. The place I went was a bad, bad place.

The cabbage was not cabbage, it was thinly sliced, light green, massively hot peppers. As gringas, we should not have eaten even one sliver, but Emily and I had eaten what only professionals should attempt. This is what the locals considered telling us but did not.

The spice was on a level that I feel should be illegal without written consent and an educational video. The heat is hard to describe but it was on the level of demons. It was like my tongue had been replaced by a burning coal that clawed down my throat. The demon was a grow-er as well as a show-er, and as it matured, my face and entire body turned vivid red. I wanted to rip out my tongue and call it a day. I considered knocking myself unconscious rather than deal with these repercussions.

Emily, who is typically more intelligent than me, leapt into action. She stood up, banged her fist on the table, and screamed “LECHE!!!” (“MILK!!!”) through the tiny restaurant. Like, loudly. We were battling demons and everyone, including Ellen, started laughing at us. They were laughing at us, you guys!

The minutes crept along and we fought for survival. We were animal, we were instinct, we did what we had to do. I had an ineffective hand fan thing going and Emily was gasping. When we could speak, we could only say: “Oh my God…holy sh*t…that is sofa-king hot…oh my GOD…I’m going to die…”. Soon we stopped speaking because the burn had evolved and any air entering or leaving our oral cavities now felt very bad indeed.

Emily stepped outside to dry heave for a while and I went into catatonic meditation. Emily remembers a big full moon shining down on her as she writhed. I only remember red.

The whole ordeal lasted about ten minutes, but those were some loooong minutes. When we were capable of conversation again, the locals explained what we had eaten and used the phrases “muy malo” (“very bad”) and “muy caliente” (“very hot”) a lot. Yeah, no sh*t Sherlocks, very much muy malo.

I don’t think I need to describe the exorcising of the demons the next day. The below image adequately portrays the experience: 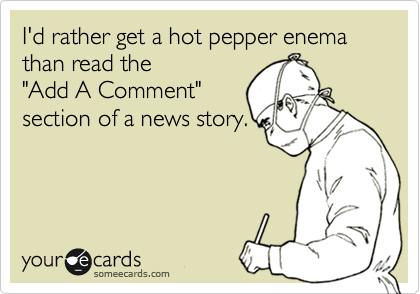 Pain, after all, is relative mis amigos. But, the madness found in the comment section of a news story is a topic for another post.